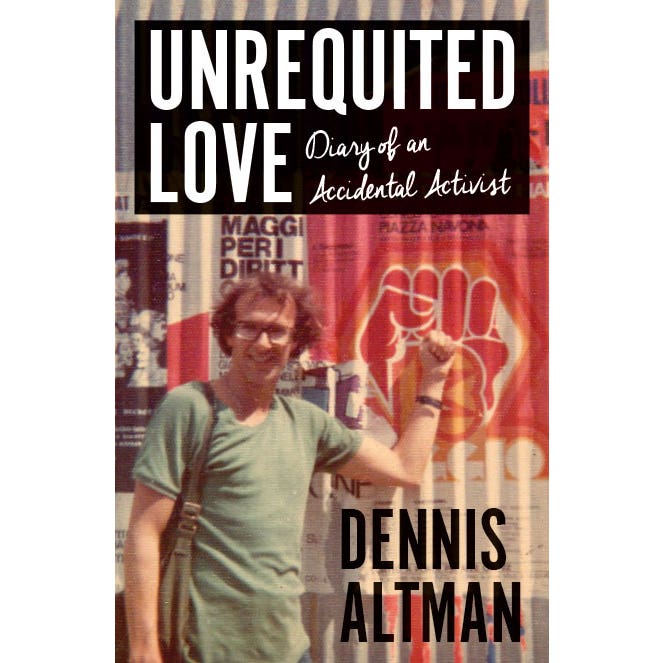 Diary of an Accidental Activist

Dennis Altman's long obsession with the United States began when he went there as a graduate student during Lyndon Johnson's Presidency. His early writing stemmed from the counter-culture that developed in the States in the mid-1960s. Altman was involved in early Gay Liberation, and his 1971 study Homosexual: Oppression and Liberation is regarded as a classic work in its field. Since then, Altman's writings have touched in various ways upon the shifting terrain of sexual politics, including the AIDs epidemic, which he witnessed from the onset while living in New York.

Altman's memoir, Unrequited Love, is as wide-ranging and remarkable as his career, moving between Australia, the United States, Europe and parts of Asia, and influenced by encounters with intellectuals and writers including James Baldwin, Gough Whitlam, Dorothy Porter, Christos Tsiolkas, Gore Vidal and Susan Sontag.

Written through the lens of recent activism and the global rise of authoritarianism, this is a story of a half century of activism, intellectualism, conflict and friendship.

Excerpt (from the Introduction):

‘The weekend before the election of Donald Trump, one of my cats died while I was visiting Los Angeles. On Election Day I walked past one of the larger polling places in West Hollywood, but there was no sense of the community that Australians associate with elections, no enthusiasts handing out election materials, no sausage sizzle or school fetes. Driving back to West Hollywood that evening the streets were unnaturally quiet. The bar on Santa Monica Boulevard that had promised “high fives for Hillary” was gloomy. The following weekend, in San Francisco I saw several protests, small and unsure of their objectives. The anti-Donald Trump marches were largely expressions of collective grief, with occasional flashes of anger at a system that gave the presidency to the candidate with fewer votes than his opponent.’