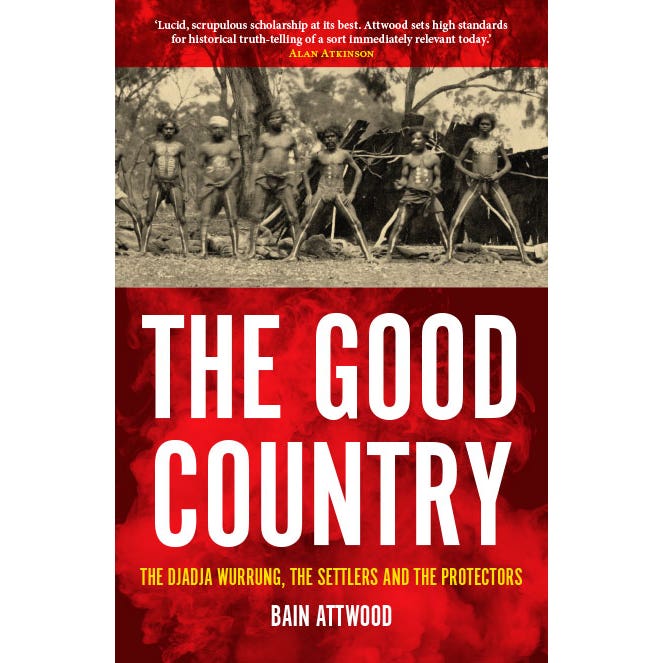 The Good Country - The Djadja Wurrung, the Settlers and the Protectors

The Djadja Wurrung, the Settlers and the Protectors

‘…a deep local history that pays attention to the forces of time and place to explore how colonial relations evolved as they did in this region, and how Aboriginal people responded to the successive colonial processes of dispossession, institutionalisation, and assimilation.’
Amanda Nettlebeck, Australian Book Review

‘…once you have this broad picture of, first, the Aboriginal nations’ territory, then the overlay of the settlers’ claims, you begin to see the land differently.’ Rosemary Sorensen, Daily Review

Beyond the generalisations of national and colonial history, what can we know about how Aboriginal nations interacted with the British settlers who invaded their country, the men appointed by the imperial and colonial governments to protect them, and each other?

In The Good Country Bain Attwood makes a major contribution to our knowledge of this period by providing a superbly researched, finely grained local history of the Djadja Wurrung people of Central Victoria.

The story is a shocking one, of destruction, decimation and dispossession, but, equally powerfully, it is not one of unceasing conflict. With reference to an unusually rich historical record, concepts such as the frontier and resistance emerge as inadequate in this context. Attwood recovers a good deal of the modus vivendi that the Djadja Wurrung reached with sympathetic protectors, pastoralists and gold diggers, showing how they both adopted and adapted to these intruders to remain in their own country, at least for a time.

Finally, drawing past and present together, Attwood relates the remarkable story of the revival of the Djadja Wurrung in recent times as they have sought to become their own historians.