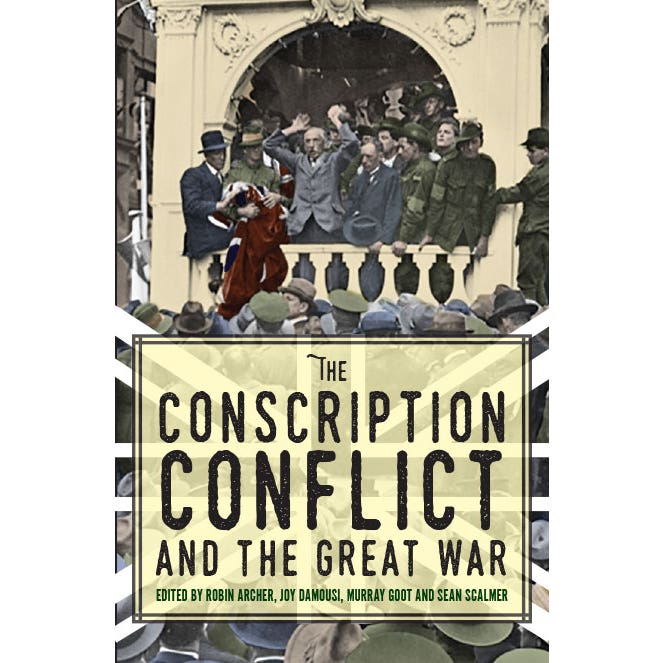 The Conscription Conflict and the Great War

The Conscription Conflict and the Great War

While the Great War raged, Australians were twice asked to vote on the question of military conscription for overseas service. The recourse to popular referendum on such an issue at such a time was without precedent anywhere in the world. The campaigns precipitated mass mobilisation, bitter argument, a split in the Labor Party, and the fall of a government. The defeat of the proposals was hailed by some as a victory of democracy over militarism, mourned by others as an expression of political disloyalty or a symptom of failed self-government.

But while the memory of the conscription campaigns once loomed large, it has increasingly been overshadowed by a preoccupation with the sacrifice and heroism of Australian soldiers – a preoccupation that has been reinforced during the centennial commemorations.

This volume redresses the balance. Across nine chapters, distinguished scholars consider the origins, unfolding, and consequences of the conscription campaigns, comparing local events with experiences in Britain, the United States, and other countries. A corrective to the ‘militarisation’ of Australian history, it is also a major new exploration of a unique and defining episode in Australia’s past.

'The Conscription Conflict tells a forgotten story, it fills a void in Australian history. And – as the best writers of history do – the authors of this collection allow the protagonists to speak for themselves. The sound and fury of those times, the words that bounced off these very walls, still ring loudly in this book.'  Bill Shorten MP full launch speech

'For Australians, a complete understanding of the Great War will only be gained by reading and thinking about the conscription debates, their outcomes and their meaning.' Luke Foley MP full launch speech