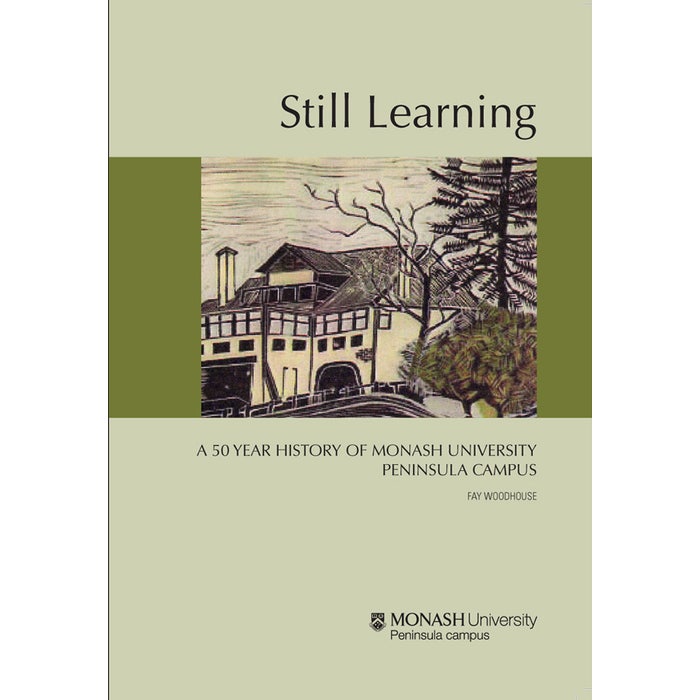 Still Learning: A 50 Year History of Monash University Peninsula Campus is an institutional history that brings the lives of students and staff – academic and extracurricular– into focus, and conveys the excitement and atmosphere of the times.

Several of Australia’s most famous artists, teachers, writers, politicians and entertainers studied at Peninsula Campus, and Still Learning connects significant moments in Australia’s history to their time on campus. Well known children’s writer Paul Jennings, artist and sculptor Peter Corlett and the incorrigible Max Gillies were all students at the institution. As editor of the student magazine Struan,Gillies made a name for himself in 1962 over the issue of censorship, at a time when censorship laws greatly impacted on the value of student reading materials.

In the 1960s and 1970s a ‘Miss Frankston’ competition, which would not be countenanced today, was a popular event. Students writing in Struan enjoyed a staple diet of sport, social activities, rock music, sexual relationships, and interstate and overseas trips. They nonetheless complained of lack of funds for food! The 1970s were turbulent times in Australia, and the issues of the day played out in the lives of students and staff on the campus.

Still Learning highlights the Portsea Annexe and the significant part it played as an external venue for teachers developing their classroom experience. In its in carnations as Frankston Teachers’ College and the State College of Victoria at Frankston, the institution thrived. However, as the Chisholm Institute of Technology at Frankston it faced many challenges and entered into a period of relative decline.The timely merger with Monash University in 1990 slowly improved the campus’s fortunes. Today, Monash University Peninsula Campus is a significant part of the southern hemisphere’s largest university, with a vibrant campus and a key focus as a health precinct.