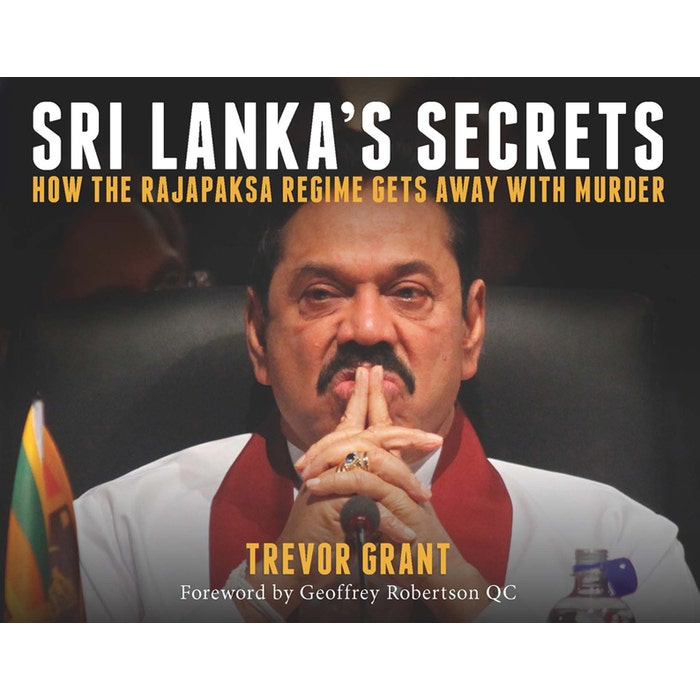 Sri Lankas Secrets: How the Rajapaksa Regime Gets Away with Murder

How the Rajapaksa Regime Gets Away with Murder

“Sri Lanka’ Secrets is a must-read … This is a determined and forceful portrayal of the nature of Sri Lankan society and the corrupt regime running the country. The authority of this book is recognised in the foreword by Geoffrey Robertson QC.”
— Bruce Haigh, “Book Review: Sri Lanka's Secrets, by Trevor Grant is Chronicle of Genocide”, Sydney Morning Herald, 5 December 2014. Read Bruce Haigh's full review.

“The detail in this book is shocking, the descriptions of torture and casual brutality hellish. The book effectively accuses both Australia’s major political parties of turning a blind eye to what is going on … It's not just the Rajapaksa government which stands accused by this book. It's us, the Australian people. We have allowed a slogan – stop the boats – to become so pre-eminent in our national life that we have been morally blinded.”
— Martin Flanagan, “Our Eyes are Blind to Tamil Torture”, The Age,
25 October 2014. Read Martin Flanagan’s full article.

Read the new review on the Good Reads website.

As the civil war in Sri Lanka drew to its bloody end in 2009 the government of this island nation removed its protection from UN officials and employees, who, along with other international observers, were forced to leave the conflict zone. President Mahinda Rajapaksa and his inner circle wanted, it seemed, a war without witness.

The end result was the deliberate slaughter of an estimated 70,000 innocent civilians. However, many survivors, and some who died, were able to capture on camera the horrifying conclusion to the war and the cruel deprivations of the internment camps that followed. Today, through their images and testimony, Rajapaksa stands accused of war crimes.

In Sri Lanka’s Secrets experienced journalist Trevor Grant presents the shocking story of the final days of this war, alongside the photographs and eye-witness accounts of many Tamils, including Maravan, a social worker who fled to Australia by boat after being tortured by soldiers seeking his folio of photographs.

Grant also details the continuing torture and abuse of Tamils in Sri Lanka, and some national governments’ ongoing support for a regime that has abandoned any pretense of democracy. Foremost among these enthusiastic supporters has been the Government of Australia, cynically preoccupied with ‘stopping the boats’ fleeing Sri Lankan state terror. At any cost.