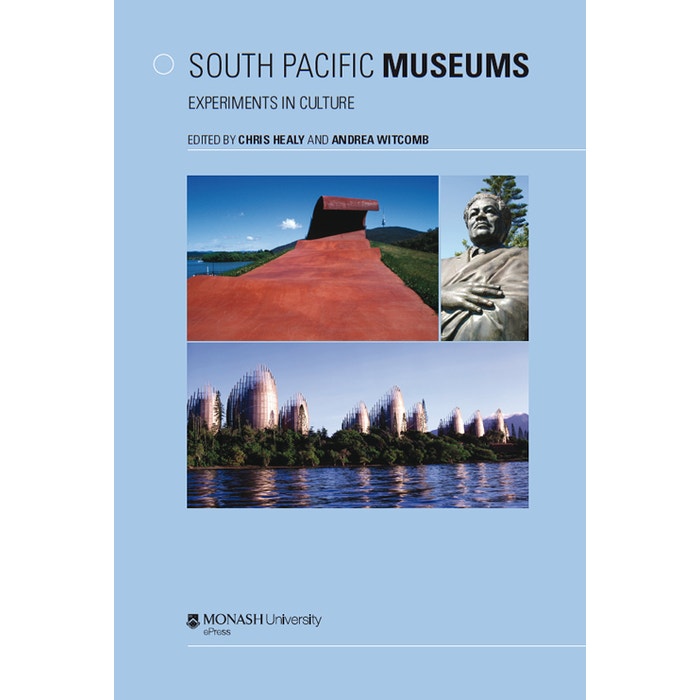 South Pacific Museums: Experiments in Culture is a collection of outstanding analyses of museums in the South Pacific, written by cultural, museum and architectural critics, and historians. A series of snapshots introduce the reader to key museums in the region and longer essays explore these museums in broad terms.

Over the last 50 years, museums have been regarded by many scholars and cultural critics as archaic institutions far from the cutting edge of cultural innovation. This judgement is being proved wrong across the globe, with innovative museums staking out new territory. Nowhere is this more striking than in the South Pacific where new and redeveloped institutions have included the Museum of New Zealand Te Papa Tongarewa, the National Museum of Australia, the Melbourne Museum, the Australian Centre for the Moving Image, the Museum of Sydney, the Gab Titui Cultural Centre in the Torres Strait, the Auckland Museum, the Centre Culturel Tjibaou and the Vanuatu Cultural Centre.

South Pacific Museums make sense of these museums as part of the complex field of heritage, where national economies meet global tourism, cities brand themselves, and indigeneity articulates with colonialism. The effect is one of cultural experimentation. Part One, 'New Museums', introduces three different museums in distinctive national contexts – Te Papa, the Centre Culturel Tjibaou and the National Museum of Australia. Essays in this part grapple with the role of these museums in the nation at particular historical moments under specific political pressures. Part Two, 'New Knowledges', documents practices and exhibitions at the point of tension between indigenous and non-indigenous interests in the museum. Part three, 'New Experiences', explores the ways in which museums in the South Pacific are producing that ineffable cultural phenomenon – experience.