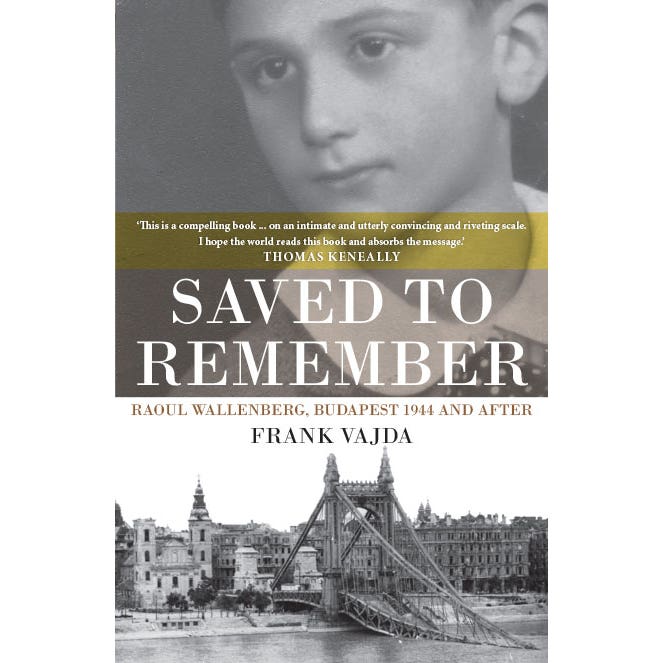 Saved to Remember: Raoul Wallenberg, Budapest 1944 and After

Raoul Wallenberg, Budapest 1944 and After

'This is a compelling book, telling the story of the nonpareil of rescuers, Wallenberg, and of his survivors, and one in particular, on an intimate and utterly convincing and riveting scale. I hope the world reads this book and absorbs the message.'
— Thomas Keneally

‘In my mind, while Wallenberg is clearly Vajda’s hero, Vajda himself is a hero for telling his story and for bringing so much richness to our world.’ — longingtobe.wordpress.com

Frank Vajda, a major figure in Australian neurology, was a boy in Budapest, Hungary, during the Second World War. In the care of his courageous and ever-resourceful mother, he survived the attempt by Hitler’s Nazis and a fascist Hungarian militia to murder him, his family and the rest of the Jews of this nation.

In Saved to Remember Vajda vividly and matter-of-factly conveys what life was like for Jews trying to stay alive in a world where the law of the land, backed up by brute soldierly force, suddenly determined that they were to be killed, and how they hid, bluffed, and fought to avoid that fate.

Vajda pays tribute to those who did not survive, including his father, and to those who did their best to save them, amongst whom the name of Raoul Wallenberg, Swedish diplomat, shines most brightly. Saved to Remember is also an account of Vajda’s ongoing campaign to publicly recognise and honour those, particularly Wallenberg, who risked their own lives in the attempt to save Jewish lives.

At a time when the memory of this period of Hungarian history is increasingly contested, Frank Vajda’s memoir is important both for what it reveals of what happened and for what it says of how these events should be remembered.