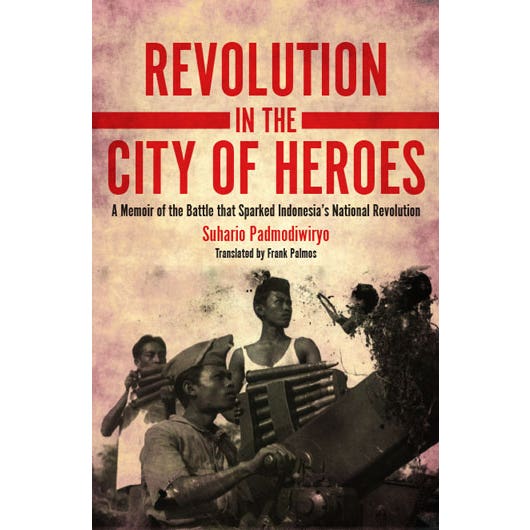 Revolution in the City of Heroes

Revolution in the City of Heroes

A Memoir of the Battle that Sparked Indonesia’s National Revolution

'This remarkable memoir, translated and edited by Frank Palmos, brings to light in stunning detail the prelude to the iconic Battle of Surabaya in November 1945. It is one of the very few accounts told from a local perspective by a leading participant in the events. Rich in anecdotes and lived history, Revolution in the City of Heroes is a valuable corrective both to Jakarta centric and Western views of the seminal conflict and is required reading for students of Indonesia’s revolutionary past.' — Dr David Bourchier, Associate Professor, Asian Studies, University of Western Australia

'Suhario (Kecik) Padmodiwiryo's memoir of a ragged band of student warriors recounts the birth of Indonesia's national revolution on the bloody streets of Surabaya in East Java. They first seized their city and their arms from the Japanese occupying force; then blocked Dutch colonialists from an easy return. Finally they would face off against British troops, tanks, bombers in two weeks of bloody fighting street by street, kompong by kompong. In so doing they lit the spark that would lead to Indonesia's independence. We owe sincere thanks to Kecik for writing his story and to Dr. Frank Palmos for his careful translation of that story into English. Bravo!' — Joseph L. Galloway, co-author of We Were Soldiers Once ... and Young, We Are Soldiers Still and Triumph Without Victory: A History of the Persian Gulf War

‘An important book which every young Australian learning Indonesian and understanding Indonesian nationalism should have access to.’ — Professor Anton Lucas

The battle of Surabaya looms large in the history of Indonesia. Yet the story of this battle is not well known outside of that nation. Newly liberated from nearly four brutal years under Japanese control, the people of the lands that would become Indonesia faced great uncertainty in October 1945, as the British Army attempted to deal with surrendered Japanese personnel and restore Dutch colonial rule. The youth of Surabaya seized Japanese arms and repelled the force sent to occupy this city. They then held off British reinforcements for two weeks, battling tanks and heavy artillery with little more than light weapons and sheer audacity. Though eventually defeated, Surabaya’s defenders had set the stage for Indonesia’s national revolution.

Based on the diary of 24-year-old Indonesian medical student Suhario Padmodiwiryo, Revolution in the City of Heroes is an evocative first-hand account of the popular uprising in Surabaya. It vividly portrays the chaotic swirl of events and the heady emotion of young people ready to sacrifice their lives for independence, and is essential reading for Australians seeking to gain a better understanding of their increasingly important northern neighbour.