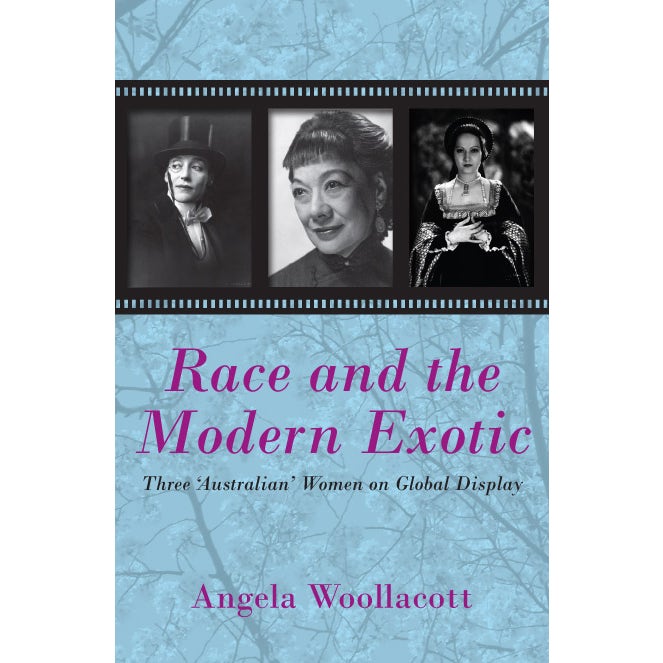 ... these biographies are immaculately researched, stand as exemplary models of biography in context, and complicate existing understandings about race, gender, and popular culture. And best of all, the style is engaging and highly readable — I couldn’t put the book down.
— Richard Waterhouse, Biography 35.2, Spring 2012

Annette Kellerman, Rose Quong and Merle Oberon were internationally successful ‘Australian’ performers of the first half of the twentieth century. Kellerman was a swimmer, diver, lecturer, and silent-film star, Quong an actor, lecturer and writer who forged a career in London and New York, and Oberon one of the most celebrated film stars of the 1930s and 1940s, first in London and then Hollywood.

Through her international vaudeville performances and film roles, Kellerman played with the quasi-racial identity of South Sea Islander. Quong built a career based on her own body, through a careful appropriation of Orientalism. Her body was the signifier of her Chinese authenticity, the essentialist foundation for her constructed, diasporic Chinese identity. The official story of Oberon’s origins was that she was Tasmanian. However, this was a publicity story concocted at the beginning of her film career to mask her lower-class, Anglo-Indian birth. Despite anxious undercurrents about her exoticism, Australians were thrilled to claim a true Hollywood star as one of their own.

These three women performers created newly modern, racially ambiguous Australian femininities. Racial thinking was at the core of White Australian culture: far from being oblivious to racial hierarchies and constructions, Australians engaged with them on an everyday basis. Around the world, ‘Australian’ stars represented a white-settler nation, a culture in which white privilege was entrenched, during a period replete with legal forms of discrimination based on race. The complex meanings attached to three successful ‘Australian’ performers in this period of highly articulated racism thus become a popular cultural archive we can investigate to learn more about contemporary connections between race, exoticism and gender on the global stage and screen.