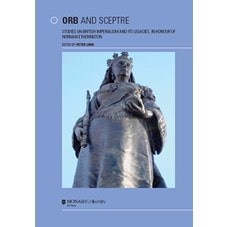 Orb and Sceptre: Studies in British Imperialism and Its Legacies, in Honour of Norman Etherington

Orb and Sceptre: Studies in British Imperialism and Its Legacies, in Honour of Norman Etherington

Orb and Sceptre brings together recent cutting-edge work on British imperialism by Australian researchers closely associated with Norman Etherington, one of Australia's most eminent scholars in this field. Orb and Sceptre reflects the trajectory of British Empire history in the academy over the last forty years. Demands for new nationalist histories for decolonised territories have combined with renewed attention to the role of the periphery in the making and unmaking of empires. This has formed an explosive mix that has blown apart traditional conceptions of Empire and Commonwealth history.

The colonial construction of knowledge is a principal theme in Orb and Sceptre.Former colonies and dependencies looked to a fresh generation of historians to write their histories, generally conceived as grand narratives of escape from imperial shackles. At the same time, a new wave of scholars influenced by feminism, neo-Marxism, dependency theory and postcolonialism laid the groundwork for a renaissance in Empire and Commonwealth history. These historians have been rediscovering the links that continue to connect former colonies to their imperial pasts.

The book is enlivened by a wide range of illustrative material, including photos, drawings and maps.

Orb and Sceptre is a festschrift in honour of Norman Etherington, one of Australia's most eminent scholars of imperialism.