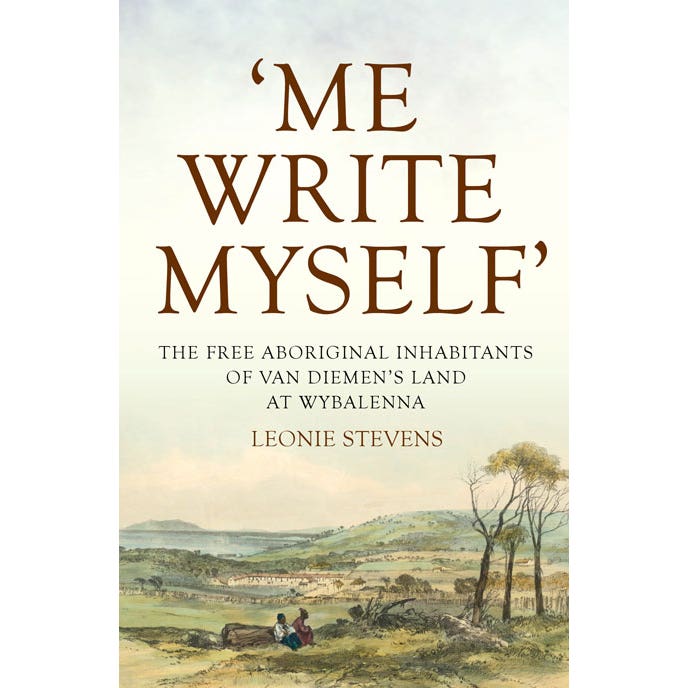 Me Write Myself : The Free Aboriginal Inhabitants of Van Diemen's Land at Wybalenna, 1832-47

The Free Aboriginal Inhabitants of Van Diemen's Land at Wybalenna, 1832-47

'Not since Brian Plomley made available the Wybalenna journals of George Augustus Robinson have we been allowed such an insight into one of the darkest and most poignant episodes of Australia’s colonial history. Leonie Stevens’ Me Write Myself takes an essential next step in expounding the little known story of Tasmania's 19th century experiment with Aboriginal ‘extermination’. This is a story of hope, courage and determination set against the disturbing reality of a past that all Australians should confront.' Dr Greg Lehman, Fellow, Institute for the Study of Social Change, University of Tasmania

'This is an absolutely beautifully written book. Stevens engages and challenges other historians, but more with urgency and invitation to share, rather than oneupmanship … This is academic history written with head and heart, and with eyes and ears open. I hope and expect to see it shortlisted for history and non-fiction prizes over the next year. Read it.' Janine Rizzetti, historian and blogger
Read the full review

'This beautifully written and detailed history of Wybalenna on Flinders Island and its colonial contexts, is told through the rich records left by and about the First Tasmanians resident there. It privileges Aboriginal testimony in a way rarely achieved before and will become a classic of Tasmanian history … a sparkling book that makes brilliant use of Aboriginal testimony.' Richard Broome
Emeritus Professor of History, FAHA, FRHSV

‘It’s not often that I close up a history book with a “Well done!”, but I did with Leonie Stevens’ beautifully written Me Write Myself. Right from its quietly restrained front cover, through to its ending which rounds off and yet expands and invites further conversation, this is an exquisitely crafted book.  It works on so many levels: as narrative, as critique and as history … This is academic history written with head and heart, and with eyes and ears open.  I hope and expect to see it shortlisted for history and non-fiction prizes over the next year. Read it.' The resident Judge of Port Phillip (blog)

Exiles, lost souls, remnants of a dying race … The fate of the First Nations peoples of Van Diemen's Land is one of the most infamous chapters in Australian, and world, history. The men, women and children exiled to Flinders Island in the 1830s and 40s have often been written about, but never allowed to speak for themselves. This book changes that.

Penned by the exiles during their fifteen years at the settlement called Wybalenna, items in the Flinders Island Chronicle, sermons, letters and petitions offer a compelling corrective to traditional portrayals of a hopeless, dispossessed, illiterate people’s final days. The exiles did not see themselves as prisoners, but as a Free People. Seen through their own writing, the community at Wybalenna was vibrant, complex and evolving. Rather than a depressed people simply waiting for death, their own words reveal a politically astute community engaged in a fifteen-year campaign for their own freedom: one which was ultimately successful.

‘Me Write Myself’ is a compelling story that will profoundly affect understandings of Tasmanian and Australian history.