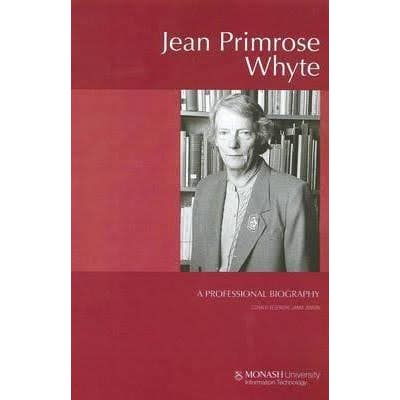 After growing up on a remote South Australian property, and having seen her mother taken by a shark when she was two, Jean Primrose Whyte went on to become a dominant figure in Australian librarianship in the second half of the 20th century.

Her time at the University of Chicago Graduate Library School was vital; it resulted in numerous lasting friendships and reinforced her commitment to the North American pattern of professional education in librarianship.

In 1959 she went to the Fisher Library, University of Sydney, and in 1972 to the National Library of Australia, where she was one of only two women (among 850 men) in the second division of the Commonwealth Public Service.

She had a pivotal and influential role as editor of the Australian Library Journal (1959–71).

She became foundation professor of the Graduate School of Librarianship, Monash University (1975–88), where she implemented her ideas about professional education and produced outstanding graduates while promoting research.

In 1987 she received the highest award available to a professional librarian in Australia, the H. C. L. Anderson Award.

She was an accomplished poet, and hand-printed her own and others’ works.
Physically she was imposing, and students often remained in awe of her, but she took the opportunity to mould and encourage bright young minds, and those who were prepared to meet her standards became lifelong friends in whose careers she continued to take a practical interest.