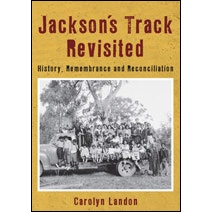 In the late 1990s, Carolyn Landon collaborated with Daryl Tonkin to write his memoir of life at Jackson's Track. It was the story of a White man and his Aboriginal family, of family ties, hard work, happiness, betrayal, racial prejudice and ultimately, from Daryl's point of view, tragic dispossession.

Since being published in 2000, Jackson's Track has sold more than 60,000 copies. Now, Carolyn Landon has come back to the events of the story to examine them anew. In Jackson's Track Revisited, the voices of Aboriginal people who lived at the Track mingle with those of the White Australians who tried to 'improve' their lives in the 1950s, the era of assimilation.

An exploration of the historical factors surrounding Tonkin's story leads to discussion of the Victorian Aborigines Welfare Board, the Victorian Aborigines Advancement League and the policy of assimilation that was so prevalent in mid-twentieth century Australia. This concise book contains many surprises. The new stories take complex twists and turns as Landon explores the motives of all the players and this involves revisiting Tonkin's own memories.As Landon seeks others' interpretations of events, she also analyses her own changing understandings, uncovering the prejudices she, as interviewer, researcher and historian, has brought to the project. The testimony of one Aboriginal participant is particularly unforeseen and forthright. It shows that the way the Kurnai people see themselves has escaped the constructions White Australians have placed upon them ever since invasion.

Finally, Jackson's Track Revisited focuses on the friendship between Landon and Pauline Mullett, daughter of Daryl Tonkin. Mullett leads Landon into her existing culture a culture which many White people believed no longer existed helping Landon to find meaning in all the stories.