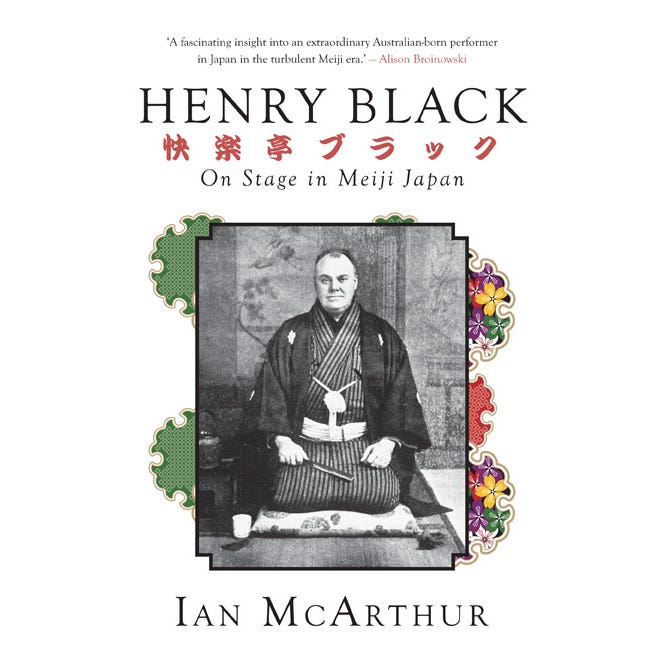 ‘Through a mastery of numerous and often tantalizingly vague sources, McArthur has rescued from obscurity one of the most startling characters of the era, whose life fully deserves a wider remembrance ...’
— Anthony Head, 'Poison and bigamy', Times Literary Supplement, 14 March 2014

‘A fascinating insight into an extraordinary Australian-born performer
in Japan in the turbulent Meiji era.’ — Alison Broinowski

'Ian McArthur’s study of Henry Black, a Briton who became a professional rakugo-ka (storyteller) in Meiji Era (1868-1912) Japan, is a reminder that many colorful characters from that turbulent time — especially foreigners — remain little known to contemporary readers ... Henry Black’s life is colorful enough to inspire a rollicking work of historical fiction, and maybe it will someday — with thanks, no doubt, to this detailed survey, the first in English of an extraordinary life.' — Edan Corkill, Japan Times January 2014.

These tales, later produced as books, brought notions of European modernity to many ordinary Japanese.

Black also acted kabuki roles, managed an orchestra, performed magic and hypnotism, lived with his Japanese male lover, drank heavily, and practised tea ceremony. His voice was recorded for the London Gramophone Company on the first disc-shaped recordings made in Japan.

In the 1870s Black had joined the pro-democracy movement, promoting equal rights and an elected assembly. His later affiliation with the San’yū guild of storytellers, under the professional name of Kairakutei Burakku, enabled him to promote the movement’s aims through his stories. He became a naturalised Japanese, and was shunned by his own family.

This is the first full-length English-language account of Henry Black. Translating Black’s narrated adaptations and drawing on newspapers and diary entries, Ian McArthur demonstrates Black’s individual contribution to the modernisation of Meiji-era (1868-1912) Japan.