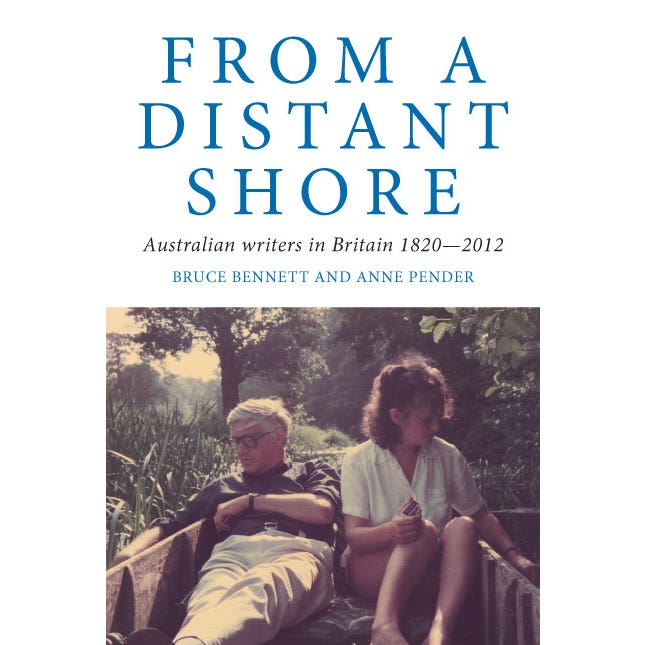 From a Distant Shore: Australian Writers in Britain 1820-2012

From a Distant Shore

By Bruce Bennett and Anne Pender

"In place of the old polarity of cultural metropolis in Britain and cultural cringe at home, [Bennett and Pender] are more interested in convergence, and the ways in which even the most apparently assimilated Australian writers gave a distinct inflection to British forms."
– Review by Jim Davidson in The Age

"... a fitting and enduring legacy of Bruce Bennett and a further shining achievement for Anne Pender"
– Adam Shoemaker, launching From a Distant Shore
(read the full launch speech)

Bruce Bennett and Anne Pender explore the lives and creative work of Australia’s many expatriate writers living and working in Britain since the early nineteenth century. They contest the notion of Australia as an ‘import culture’ and show Australians exporting literary talent to Britain and further afield from 1820 until the present. Stories of the lives and work of writers working in all genres, from romance and crime to contemporary literary fiction, are interweaved in a collective biography.

Bennett and Pender uncover many unknown writers and document their adventures both on and off the page. They also discover the expatriate lives of figures such as Pamela Travers (author of Mary Poppins), Frederic Manning, Randolph Stow and Madeleine St John. They explore the work of lesser known writers such as Jill Neville, as well as investigating Christina Stead’s expatriate years, the modernist dramas of Patrick White and Barry Humphries, and the arguments with England expressed in the lives and work of Peter Porter, Germaine Greer, Michael Blakemore and Geoffrey Robertson.

This book is the first historically comprehensive, detailed examination of expatriate Australian writers at work in Britain. The authors illuminate two centuries of intense literary activity and discover the major contributions by Australian writers to world literature.

‘If fewer Australian writers now lust for London, Bennett and Pender have ably and entertainingly shown its attractions and the complex fates that it delivered for two centuries for those who did.’ — Peter Pierce, The Australian

‘(Gives) us a much fuller picture than before of the range of work produced by Australians in Britain since 1820.’ — Elizabeth Webby, Times Literary Supplement

‘makes significant and new contributions to the broadening of our understanding of our expatriate writers,’ — Ros Pesman, Australian Book Review