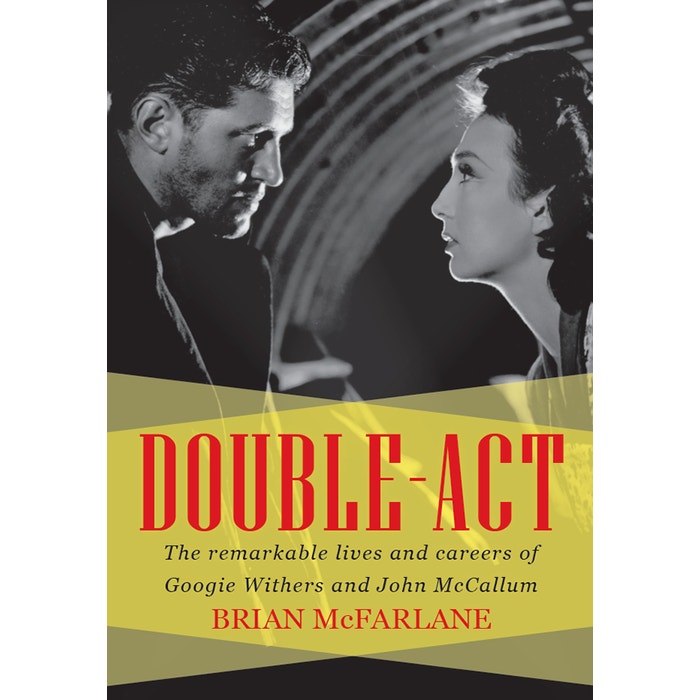 Double-Act: The remarkable lives and careers of Googie Withers and John McCallum

The remarkable lives and careers of Googie Withers and John McCallum

‘McFarlane paints a fascinatingly meticulous picture of the theatre culture that (Googie Withers and John McCallum) entered and quickly came to dominate for decades to come ... a supremely readable book … there’s no doubting the serious amount of research that underpins it, making use of even the most obscure press cutting to flesh out the sense of a private life lived in public’. — Melanie Williams in the Journal of British Cinema and Television 13: 2, 2016.

'This charming, highly detailed biography by the Australian writer Brian McFarlane is a joy from start to finish, giving us such amazing insights into two very special and simply unique characters.' — Movie Memories, Summer 2015 issue

'Brian’s book brings back wonderfully vivid memories of an important Australian past. Once I had met and worked with Googie and John I knew they were true royalty. Together, they made my life richer and gave my profession a finer meaning. This book brings them vividly to life. It is a great read.' — George Ogilvie, theatre director and drama teacher (Full speech available online)

'This book will provide lively – and for some nostalgic – reading for the general public and will be essential reading for historians of British and Australian theatre, film and television.' Desley Deacon, Australian Book Review June-July 2015

'A biography of Withers and McCallum is long overdue, and all praise to Brian McFarlane for writing one [...]'— Michael Shmith, Sydney Morning Herald

Not many can boast of careers that lasted successfully for nearly seventy years, but that is what both Googie Withers and John McCallum achieved. Googie portrayed everything from brazen murderesses to Lady Bracknell, taking in blonde nitwits, wartime Resistance workers, lady farmers and Shakespeare along the way.

John not only performed memorably in all the acting media but also was a pioneer producer in Australian television – sending Skippy into the far corners of the earth – the managing director of a huge theatrical firm, and a film director, playwright and author.
Just as remarkable was their 62-year marriage, not all that common in the entertainment world, and the way this worked is as fascinating as their varied and prolific careers.

There were plenty of disagreements along the way but underlying all was their profound respect for each other’s work and a kind of love that was essentially complementary. Together, in professional and personal matters alike, an unbeatable combination. Brian McFarlane’s biography does justice to this remarkable pair – and reads as an absorbing story.