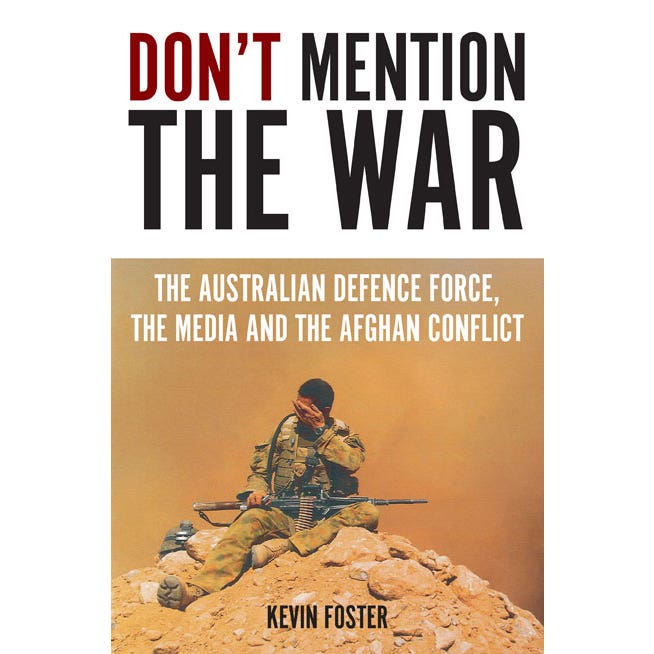 Dont Mention the War: The Australian Defence Force, the Media and the Afghan Conflict

“In a series of critical, analytical and well sourced chapters, Foster places the Australian experience of reporting war alongside those of other Allies in Afghanistan. With Australia’s commitment to that conflict almost over, he contends that spin and self-promotion have become the order of the day, and that the ADF has sought to keep the media at arm’s length.”
Media International Australia 152, August 2014

“This book is a valuable critique of a most important aspect of conflict reporting in a democratic society. Foster makes some hard-hitting points, but is the ADF listening?”
— Martin Hadlow, Media International Australia Issue No. 152,
August 2014

“It is an important question of our time. Why is this longest war in Afghanistan Australia’s worst reported war? Kevin Foster’s thorough and insightful analysis delivers important answers.”
— Chris Masters

“Don’t Mention the War sheds a revealing light on how one of our most important institutions resists independent scrutiny and open communication about what it does in the public’s name.”
[Read the full review]
— Tom Hyland, Inside Story

The war in Afghanistan is now the longest and, arguably, worst reported conflict in Australian history. In Don’t Mention the War, Kevin Foster explores why this is so and considers who engineered and who has benefitted from its impoverished coverage. He examines how and why the ADF restricted the media’s access to and freedom of movement among its troops in Afghanistan and what we can learn about their motives and methods from the more liberal media policies of the Dutch and Canadian militaries. He analyses how the ADF ensured positive coverage of its endeavours by bringing many aspects of the reporting of the war in-house and why some among the fourth estate were only too happy to hand over responsibility for newsgathering to the military. The book also investigates how political responses to the conflict, and the discourse that framed them, served to conceal the facts and neuter public debate about the war. After more than a decade of evasion and obstruction, half-truths and hype, Don’t Mention the War reveals how politicians, the military and the media failed the public over the Afghan conflict. Here is the real story behind the Australian story of the war.