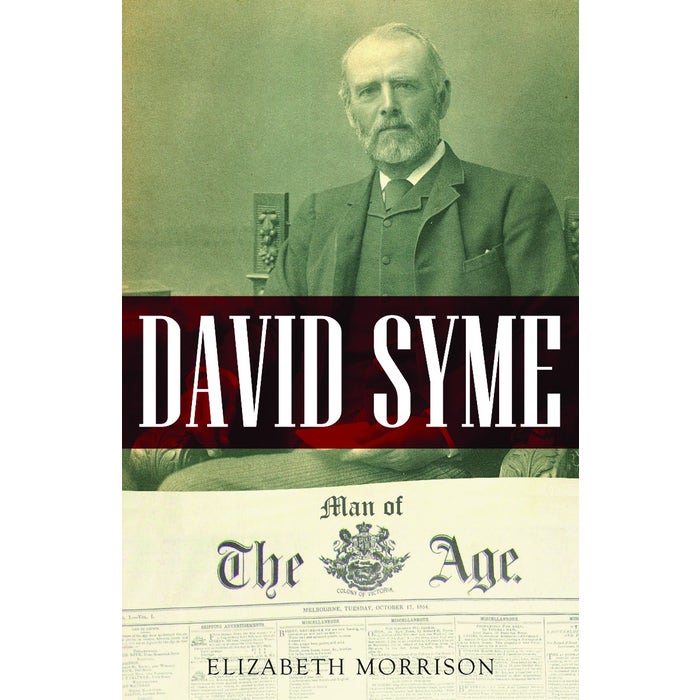 David Syme: Man of the Age

David Syme: Man of the Age

‘This is not the first biography of David Syme – earlier ones appeared in 1908 and 1965 – but it is the one he deserved. The man widely regarded as Australia’s greatest newspaperman of the 19th century was worthy of a biographer of Elizabeth Morrisons’ tenacity and literary ability … This biography of Syme is a magnificent addition to the increasing literature on Australian newspaper history.’
Rod Kirkpatrick, Australian Journalism Review, vol. 37, no. 1, July 2015

‘How wonderful to be able to hear that man’s insights on the really curly questions of newspaper life! … [T]he scrupulous detailed recording of Elizabeth Morrison’s researches is the nearest I am ever to reach to the word with the actual warmth of blood in it, and I count myself lucky indeed for her gift …[T]he book is already my own most thumbed acquisition in years’.
Peter Ryan, Quadrant  vol. 58, no. 9, September 2014

‘There can be little doubt that Morrison’s biography of David Syme fills a significant gap in the history of Victorian newspapers and is long overdue … Morrison’s tightly written and carefully researched business perspective makes its case eloquently … a substantial contribution.’ Denis Cryle, Australian Journal of Politics and History, Vol. 61, Issue 3

The Melbourne Age newspaper dominated the newspaper stage in Australia from the 1870s to the end of the colonial period. In the 1880s its circulation was far in excess of any other daily throughout all British colonial possessions and its proprietor, the driven, talented Scotsman David Syme, was acknowledged as the leader of the Australian press. For the influence that he and his newspapers exercised, he became a legend in his lifetime and  for several generations after his death in 1908.

Drawing on family and business records as well as newly digitised nineteenth-century newspaper archives, this biography of a powerful man of many parts seeks to go behind the legend and round out the story of the life – primarily as press ‘baron’ but also as author and philosopher, financier, farmer, property developer and, not least, family man.