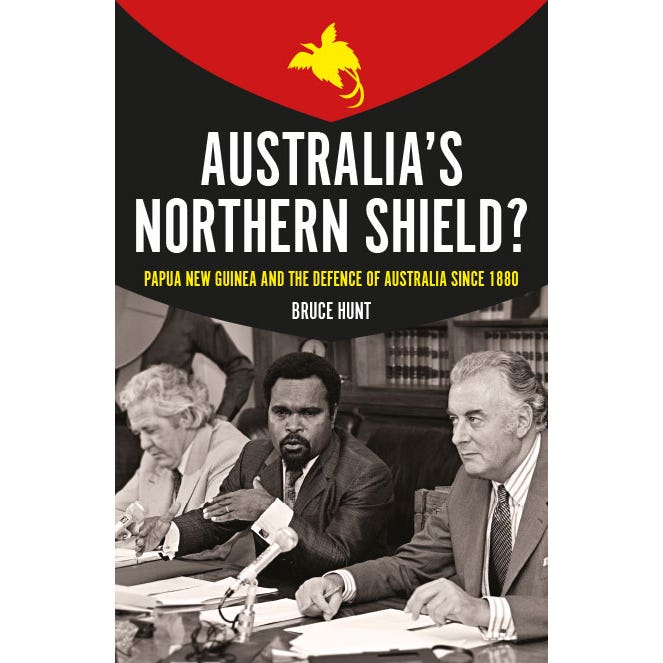 Australias Northern Shield? Papua New Guinea and the Defence of Australia since 1880

Papua New Guinea and the Defence of Australia since 1880

“This book is an invaluable reference on Australia’s strategic interests in PNG.” – Australian Defence Force Journal

“We are indebted to Bruce Hunt for showing how PNG has figured in Australia’s security thinking for well over a century.” – Allan Patience, Australian Institute of International Affairs

“This is a most welcome addition to the literature on the Australia/PNG relationship.” – Sean Dorney, The Interpreter

This book is the first to draw extensively on the recently released highly classified notes of the cabinet room discussions of successive Australian Governments from 1950 to the mid-1970s and details the changing attitude of the nation’s leaders towards the place of Papua New Guinea in Australia’s defence and security outlook. The Cabinet notebooks provide an unprecedented, uncensored insight into the opinion of Australia’s leaders towards Indonesia under Sukarno, Southeast Asia and Indo China in general, Britain and the United States and, finally, towards Papua New Guinea. The cabinet room discussions reveal attitudes towards Asia and Australia’s place in the region more nuanced, varied and sensitive than previously known. They also illustrate the dominant influence of Prime Minister Robert Menzies and Deputy Prime Minister John McEwen in shaping Australia’s response to the critical events of this time.

Australia’s Northern Shield? shows how, since colonial times, Australia has assessed the importance of Papua New Guinea by examining the ambitions of and threats from external sources, principally Imperial Germany, Japan, and Indonesia. It examines the significant change in Australia’s attitude as this region approached independence in 1975, amid concerns as to the new nation’s future stability and unity. The terms of Australia’s long-term defence undertaking are examined in detail and an examination is offered also of the most recent attempts to define the strategic importance of Papua New Guinea to Australia.