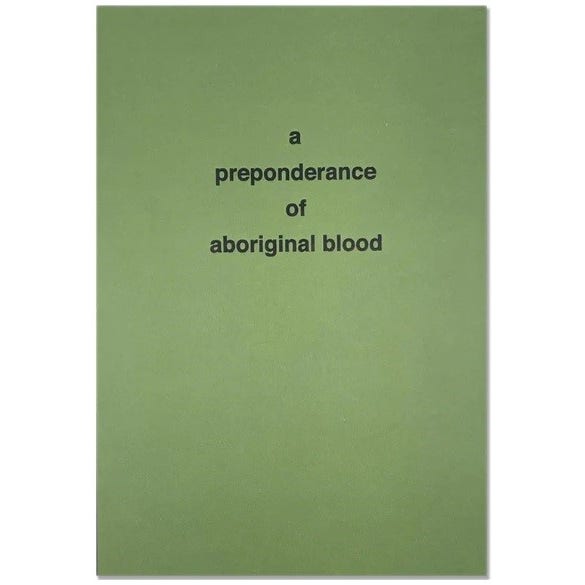 This 44-page, hardcover artist’s book is a 2019 republication of Judy Watson’s 2005 limited edition book a preponderance of aboriginal blood, initially made by the artist after listening to a lecture by Loris Williams at the University of Queensland about Indigenous people and the right to vote in Queensland. Drawing on material held in the Queensland State Archives, Watson created fifteen etchings using a chine collé technique, overprinting dark red ink onto copies of historic documents.

Watson’s 2005 prints are reproduced in this publication alongside nine pages of the Aboriginals Protection and Restriction of Sale of Opium Act 1897 (Qld), an essay titled ‘the wounds of the repressed’ by writer and curator Michele Helmrich and a fold-out timeline listing historic data such as a selection of European townships in Brisbane from 1825 up to the turn of the century, Aboriginal missions and reserves established from 1838 to the closure of the last mission in 1987, and various Acts and decisions impacting Aboriginal peoples in Queensland between 1825 to 1967.

Each copy has been signed by the artist.

The exhibition Judy Watson and Helen Johnson: the red thread of history, loose ends can be viewed at Monash University Museum of Art (MUMA) from 10 September to 12 November 2022.